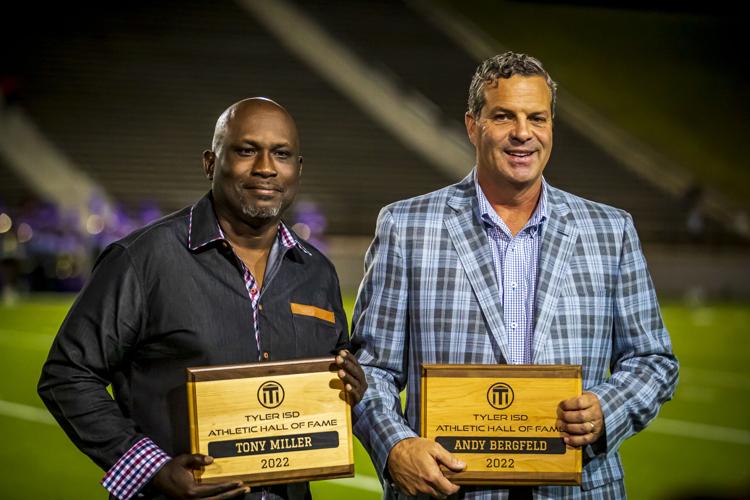 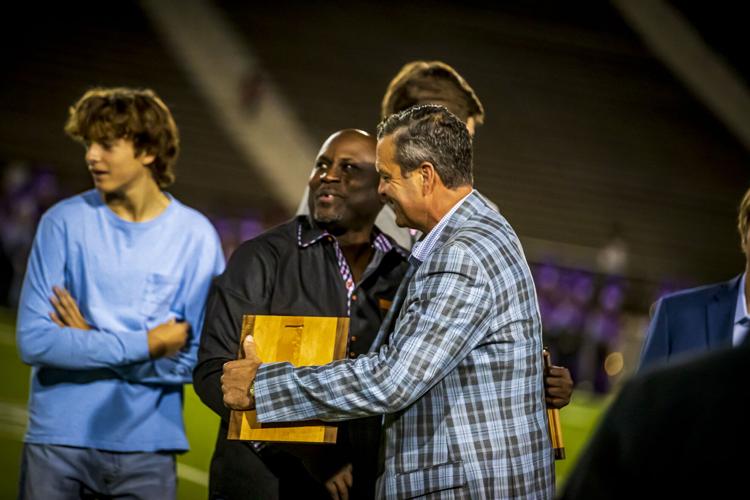 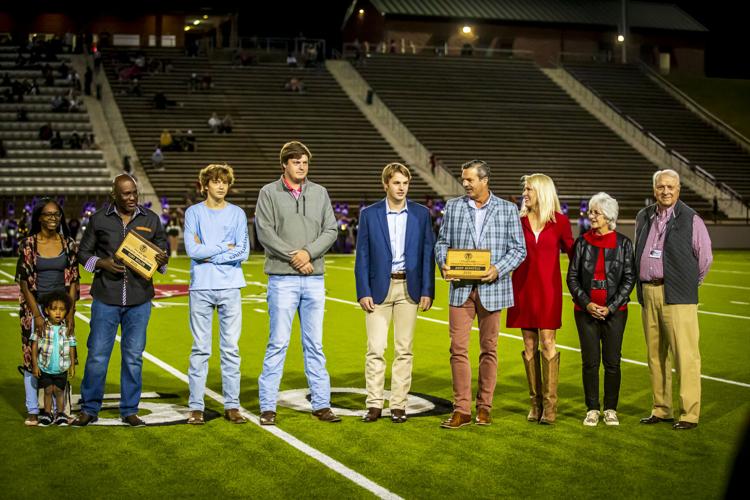 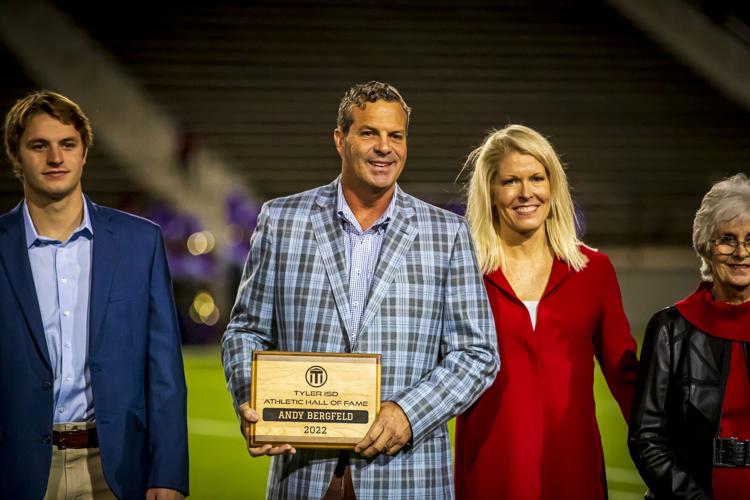 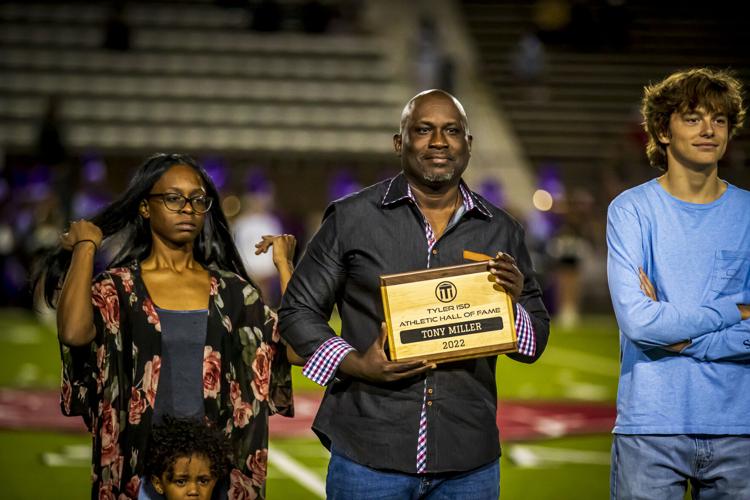 Both of them said they were honored to be inducted but more about going in together.

“It’s an honor,” Bergfeld said. “After 34 years, to think back about what we accomplished, not really knowing at the time that we were going to make a little bit of history. It’s neat to be here with Tony. He and I spent so many hours working together on the football field and on the track, that just being here with him is special.”

“This is awesome, especially going in with Andy,” Miller said. “Andy and I, we competed all of the time. My parents and my brother gave me so much support. People in the neighborhood who played street ball with me and let me race them all of the time, they couldn’t beat me. This is an honor, and I appreciate my mom, dad and brother.”

Both Bergfeld and Miller were instrumental in turning around the Red Raiders football program as both played football in the late 1980s. Plus, they were speedsters on the track.

In 1987, Bergfeld helped the Red Raiders earn their first playoff berth in the 28-year history of the program.

Bergfeld led Lee in receptions and in February 1988 became the first Robert E. Lee wide receiver to sign an NCAA Division I scholarship. Bergfled inked with the SMU Mustangs and Coach Forrest Gregg, a Pro Football Hall of Famer who was part of six NFL championships.

As a Mustang, he finished in the top 10 in the Southwest Conference in receptions in 1989 and second in the conference in touchdowns receiving that same season — scoring touchdowns at Notre Dame Stadium in South Bend, Indiana and at Kyle Field in College Station.

Bergfeld was named player of the game against the University of North Texas when he had eight catches for 125 yards and two touchdowns in the Mustangs’ 35-9 win at Ownby Stadium in Dallas.

After finishing his football career and graduating from SMU, Bergfeld moved on to South Texas College of Law where he earned his JD in 1996.

He has been married to his beautiful wife, Shawn, for 24 years and has three sons, Andrew, George and Alexander.

Miller followed a similar path in 1988 as he led the district and team in receiving and was named second team all-district.

Miller became the second receiver from Tyler Lee to sign with a Division I team when he inked with Spike Dykes and the Texas Tech Red Raiders. Tony made significant contributions to the 1992 team as well as the 1993 team that played in the John Hancock Bowl.

Miller earned his undergraduate degree from Tech in 1994 and a master’s degree from the the Lubbock school in 2004. Tony has two children.

Both had outstanding football careers, but it was their record-setting accomplishments on the track that solidified their spot in the HOF.

Miller was a three-year letterman, who at one time held the school record in both the 200 meters and the 400 meters. He was also part of the 1989 Lee track team that broke the school record set the year prior in the 4x400 when the Red Raiders clocked a time of 3 minutes and 13.69 seconds at the Texas Relays in Austin. He was the Most Valuable Player of the 1989 track team and was a two-time regional qualifier in the 400 meters.

The 1989 Lee track team took district gold in the 4x400 and was the district track and field champions.

Bergfeld was the 1988 Lee track team MVP, who also held the school record in the 200 meters (until it was broken by Miller). He was also a regional qualifier in the 400 meters and in the spring of 1988, he and Miller led the Red Raiders 4x100 relay team, which clocked a time of 41.2 seconds at the district meet, a mark that still stands as the school record, almost three and a half decades later.

At that same meet, Lee’s 4x400 team, led by Miller’s 46.9 split, qualified for regionals — a meet where four out the five fastest times in the nation would square off. Thanks to 47-second splits by both Miller and Bergfeld, Lee was able to get the silver and qualify for the UIL State Track & Field Championship.

Two weeks later (and a week after prom), in front of 54,000 spectators in Memorial Stadium in Austin, in the last race of the state meet, the relay team of Belfrey Brown, Andy Bergfeld, Gerry Jackson and Tony Miller made Robert E. Lee/Tyler Legacy history as the only relay team to medal at the state tack meet, by winning silver and placing second, just behind Dallas South Oak Cliff. Bergfeld’s 46.8 split as the team’s second leg, bolted Lee from eighth place to second place, a spot that Miller was able to hold as the anchor.